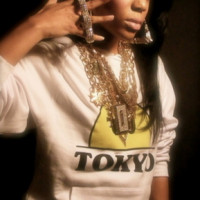 NAME: TokYo DIIVA
NiCK.NAME: TOK ToK
BoRN: JULY 31 [{8o'Sz}] BRONX [{NY}]
SQUAD: JUiCE KREW
MAiNSz: UniQUe..GAiL SCoTT
NoTE: JUiCe UP 100% JUiCe MORE ON ME DUH ToKYo aka TOK TOK was born in the Bronx, New York July 31 in the late 80's. BorN into a JamaicaN Family, ToKyo always wanted to be in the limelight whether it was Acting, Modeling or Music. At a young age, ToKyo's mother had her in various model schools and agencies such as Barbizon, IMTA, Star Search, Wilhemena etc. ToKyo was always a handful and always the center of attention. In High School ToKyo discovered another talent that she had; Rapping. It started out as just wanting a "hot voicemail!!" She would create little rap for her answerring machine which everyone loved and she thought, "Hey, im pretty good!!"ToKYo was introduced to a studio by former friend ""TRex" and knew at that point she wanted to make music. A classmate ((Kadir Hassan)) knew that ToKyo could in fact be large and pushed her to record a song with him. Since then its been history. ToKYo's swag and style makes it easier to make hits that people love and could relate to. Everyone knew ToKYo as her former name "LaDiva" but changed it after her little brother repeatedly called her a "harajuku girl" due to her colorful fashion style. ToKyo's first Manager "Brooklyn" helped push her to record and do shows but tragically passed away due to a sever heart attack. ToKyo was once in a female due called Xclusive Divaz which they made hits such as "CoverGirl" and "3step" but that didnt last very long do to numerous amounts of differences. NOw solo again with Strong Management Team behind her ((Jay Levine & Benjamin Simone of LeftHook Entertainment)) ToKyo is ready to take over the Music Industry. ToKyo's Music is a mixture of Rap and pop music and sounds like no other. Her influences are Janet Jackson, Notorious BIG, GweN StefaNi, CyNDi LAuPeR and MADONNa. ToKyo has Individuality, CharM, Beauty, and Talent which is always the best ingredients to makin the next big superstar!!!!
Friends

Weak
I have been crying and crying for weeks
How'd I survive when I can barely speak
Barely eat, On my knees

You changed my whole life
Don't know what your doing to me with your love
I'm feeling all super human, you did that to me
A super human heart beats in me
Nothing can stop me here with you
Super human (I feel so superhuman X2)
Super human

You changed my whole life
Don't know what your doing to me with your love
I'm feeling all super human, you did that to me
A super human heart beats in me
Nothing can stop me here with you
Super human (I feel so superhuman )
Super human

It's not a bird, not a plane
It's my heart and it's going, gone away
My only weakness is you
Only reason is you
Every minute with you
I can feel like I can do anything
Going going, I'm gone away in love

You changed my whole life
Don't know what your doing to me with your love
I'm feeling all super human, you did that to me
A super human heart beats in me
Nothing can stop me here with you
Super human

The Pink butterfly
looking like pink shirts,
My pink thoughts
looking like mom's skirt
My inner soul
has a pink ink
love is pink
from the cry of a baby in the sink
pink is nice
I love it to savory perfection
Pink is a man's color
I make it my selection
Pink is the star
that is iridescent
its a half moon
called a crescent
-Pink-

As you all may know, i always try to stay as connected to my fans as possible!!!

im starting a little youtube MINI-SHOW called "TOK TAKES TWO" which i basically have 2minutes everyweek where i shout out specific fans, answer fans questions, and talk about a certain topic!!!


its gonna be dope!!


my first one will be posted in about a week!


in the subject box please be specific so questions/shoutout dont get lost!!!

thxx ofr all the love and support i can only do my best to give back!!!